Over the past couple of years, I’ve seen a small but noticeable trend from Android developers I follow on Twitter — more and more are using iPhones as their personal devices, myself included.

I mostly derived this observation by spending an unhealthy amount of time on Twitter and, by chance, seeing what app they used to post. And there’s been a definite increase in “Twitter for iPhone” bylines.

So yesterday I asked about this in a highly unscientific Twitter poll**, and the results are pretty interesting! Roughly 25% of Android developers use iPhones for personal use. This landed right around where I guessed it would, based on nothing but gut feel (I thought it’d be a 70/30 spread). 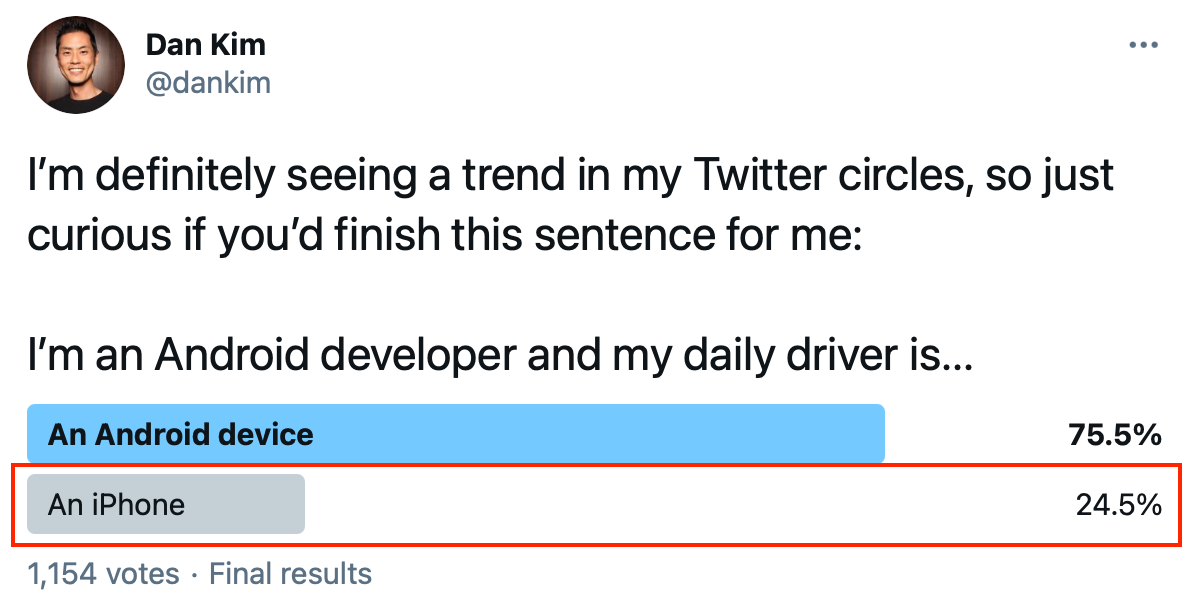 I have no data to support this, but I feel like if you went back 3-4 years, this 25% number would be a lot lower — back when Android customization was still way ahead, Pixels were a shining beacon of hope, and the cameras were no contest. Or am I completely wrong and has it always been this way? I certainly was in the majority back then, and at least a handful of folks I know who’ve recently switched would’ve been too.

This also makes me wonder if 1) Google knows this and/or 2) considers this a problem? Are they at all concerned/alarmed/discouraged that a decent chunk of folks who should probably be some of their most fervent supporters no longer want to use Android in their personal lives? I honestly don’t know, but you’d think it’d be a little disconcerting.

Incidentally, I have to think this isn’t a problem on the iOS side — can you imagine 25% of iOS developers using Android? 😅

** I would think this goes without saying, but there is absolutely no data science or real conclusions that can be drawn from a Twitter poll where God only knows who responded and why. We’re just having a fun little conversation here.