It never hurts to ask

A simple, effective piece of advice from Jason Fried

A couple of years ago, Jason Fried gave me the simplest, most effective advice I’ve ever received:

It seems so obvious, something you’ve probably heard before: it never hurts to ask. But when you actually put that advice into practice, the results are rather amazing.

In 2014 we sponsored a project management conference. As sponsors we got all the usual promotion: our logo on some slides, some tweets, email callouts, etc.

We wanted to get the most out of our sponsorship, so Jason encouraged me to get creative with what we could do. Here’s what I said:

Jason completely agreed, but I couldn’t think of a good way to pull this off. How could we clearly announce who we were and give them a sense of our friendly personalities? 😁

Aha, what a great idea — that would accomplish exactly what we wanted!

But…stage time wasn’t part of any sponsorship package they offered. And as one of the world’s worst negotiators, I was hesitant to ask for something outside of the existing options. 😶

But I needed to learn. I got over myself. I sent an email to the organizers asking nicely and explaining why it was so important to us.

You can probably guess what happened next. We got our stage time. The organizers were happy to accommodate us. It wasn’t a big deal at all.

And from that one success, I burned Jason’s advice into my brain: it never hurts to ask.

Since then, I’ve had plenty of success with Jason’s advice. Yet I’m still fascinated by how well it works.

Last week I was reminded how simple and powerful “just asking” can be. This tweet didn’t happen on its own. I had to ask! I’d written an article about how I built my first Android open source library, and was looking for ways to share it beyond our normal blog audience.

I’m a big fan of The Practical Dev, and I figured the article might be of interest to their audience. But how could I get them to share it?

I remembered Jason’s advice — it never hurts to ask. So that’s exactly what I did. I sent them a link to my article and politely asked if they’d consider sharing it. A couple of hours later they were nice enough to do so. Success!

Perhaps unsurprisingly, this advice can also apply to product design.

In the Basecamp 3 Android app we recently added a “what’s new” dialog. This lets customers know what new features we added, but also gives us a chance to ask for their review. 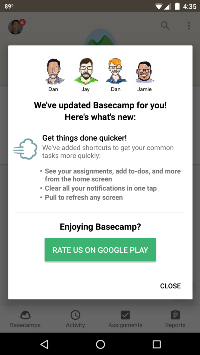 I fully admit I was skeptical that a simple “rate us” button would have any impact our ratings.

Wow, I couldn’t have been more wrong. Our positive ratings and reviews skyrocketed! 🚀

Once again Jason’s advice held true — all we had to do was ask for reviews, and people were happy to do it.

I can’t tell you how many times “it never hurts to ask” has turned out positively for me. Even if I don’t end up getting what I hoped for, it’s still nice to know that I at least asked. Nobody gets offended or upset by reasonable requests. ¯_(ツ)_/¯

I think this comes down to one fundamental truth: people want to help you.

Sure, not everyone is super generous. But as a rule I think most people try to be. If you ask for something in a nice, humble, and confident manner, they’ll try to find a way to help you.

So the next time you want something, remember: it never hurts to ask!