Admire someone? Write them an email, you might be surprised

How a simple email to Mike Monteiro led to a handshake and a hello.

A couple years ago I attended a conference in Austin. There were a lot of great speakers, but the one I really wanted to see was Mike Monteiro. I’ve admired Mike’s work from afar for many years because it’s so honest and direct.

I watched Mike’s entire talk, What Clients Don’t Know (and Why It’s Your Fault), and enjoyed it thoroughly. It was so great, I wanted to say thanks — it’s the least I could do for something I liked so much. I looked through the crowd for a while, but was never able to find him.

But I still wanted to say thanks, so I took a shot and sent him an email, fully assuming he wouldn’t read it. I kept it brief — I introduced myself, let him know that I’ve admired his work for many years, and thanked him for a great talk. 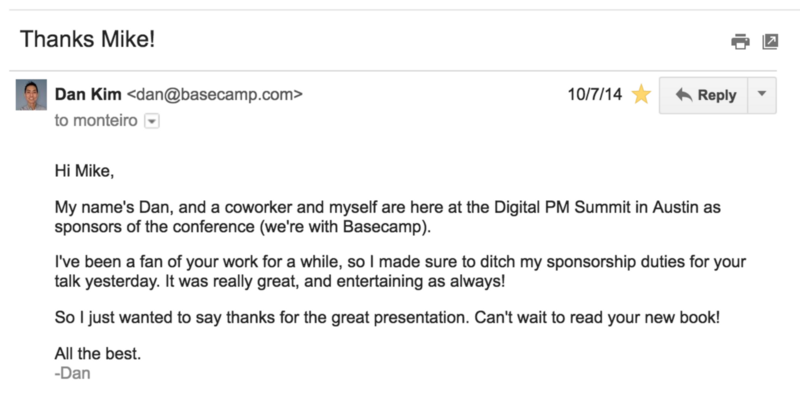 My email to Mike wasn’t anything special. Brief, friendly, and with a dash of personality. That’s it! Later that morning as we hung around the lobby, Mike walked up to me and said hello. We shook hands, and he mentioned he got my email and said thanks for that. The whole interaction was maybe 30 seconds, and I probably made a fool of myself.

But my foolishness aside, I got to meet someone who I admired. All it took was the simple act of saying thank you in an email.

So if you admire someone, want to say thank you, or just want to strike up a conversation, don’t be afraid to send a nice email. All the headlines keep declaring that email is dead, but it absolutely isn’t. Let your ideas, genuine gratitude, and personality shine in an email. You might be surprised what it leads to.